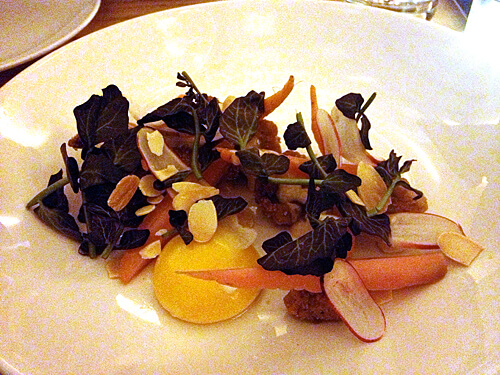 Wow, they weren’t kidding when they said time flies when you’re having fun! I can’t believe that I am already finished with culinary school. It seems like we only started last week! Not only am I done with school, I am done with Colorado… for now. I am officially a New Yorker, except with hippie dresses and no accent… =) 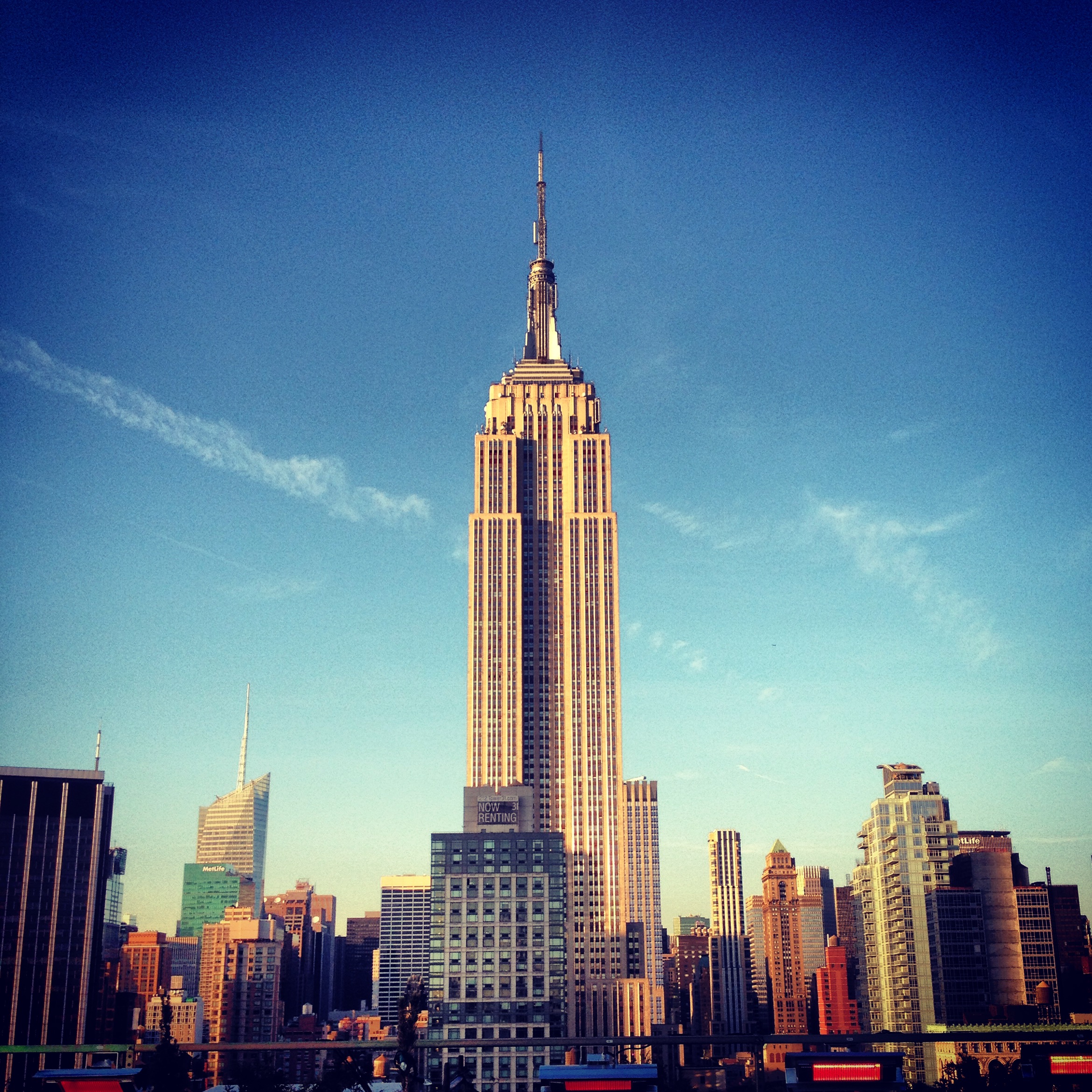 I have been working 11-13 hour days at The Modern, but so far so good. The kitchen is definitely intense! I went from a three-person line to an eleven-person line! As much as I thought I wouldn’t like the city, it has been a great first week. There are so many interesting people from all walks of life, which I love. Plus, I can get pizza anytime anywhere, winning! I also walk a lot though, which is allowing me to gorge on food all the time… life is good. 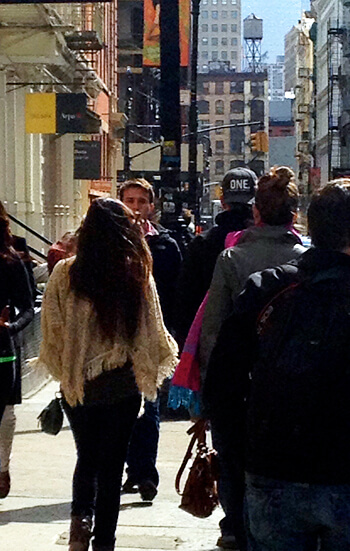 My mom came out to New York last weekend to see me off, which means only one thing. Lots of food… lots of extremely good food. We decided to make a reservation at David Chang’s restaurant Ma Peche. For those of your who don’t know about him, David Chang is the mastermind behind all of the Momofuku restaurants in New York. Ma Peche has the ambience of a relaxed, down to earth place with food good enough to come out of a Michelin starred kitchen. 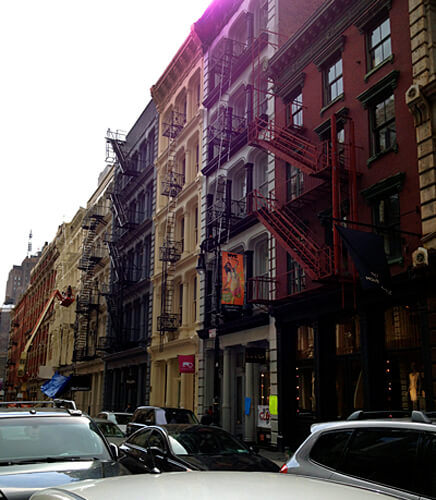 We kicked off the evening with bubbly on the 320 Fifth rooftop bar, which has the best view of the Empire State Building in the entire city I think. After a few rounds, we rushed to our reservation. 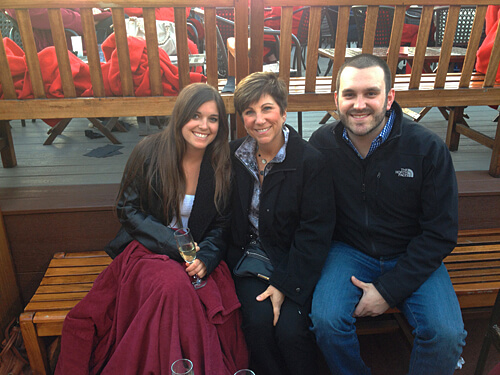 So what do you order when you go out with two avid foodies and friends? EVERYTHING! I am not sure if it was all of our ordering, or my mom saying that I was the “chef” of the group, but the kitchen even sent us an extra dish, their treat! 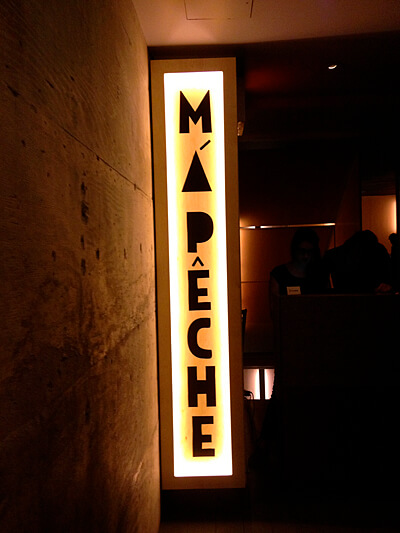 We started with the raw section. First, we had the Waygu. It was a Waygu beef tartare with parsnip, jerky and béarnaise sauce. This was the perfect salty appetizer to trigger our appetites. 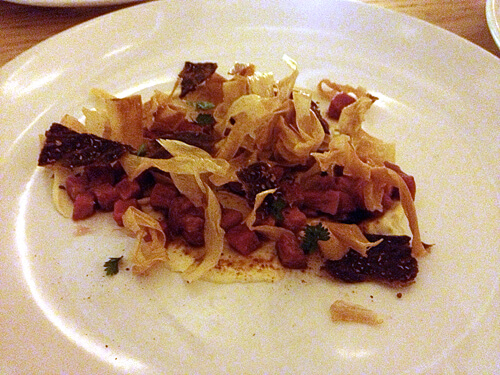 Next we had the raw scallops. These had a sweeter note and were served with plantain, yuzu and sesame. I am a sucker for scallops, so I naturally loved these as well. 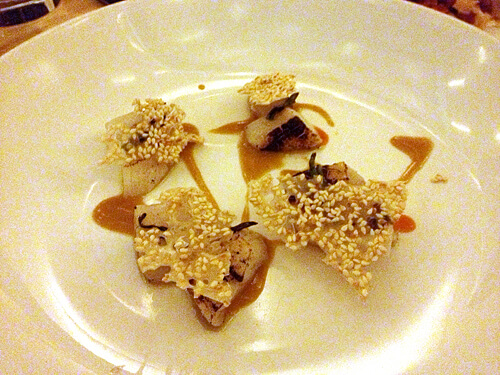 After our raw dishes, we moved onto our small plates and vegetables. We started this section with two things every foodie can’t pass up in a restaurant- Foie gras and sweet breads. The foie was served with sasparilla, brioche and coated in malt. The sasparilla gave it a sweetness that was unexpected, but exciting. 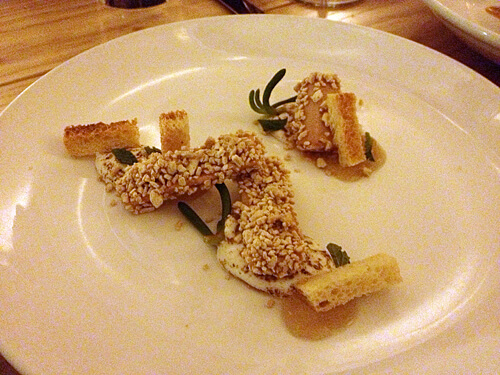 The sweet breads spoke for themselves when we ordered a second round. They were deep fried and served with almond, egg yolk and anchovy. The raw yolk was the perfect sauce.

The cauliflower was with gruyere, curry and hazelnut. An interesting, but delicious cominbation.

Next were the large plates. We didn’t order our own large plates, instead we ordered a few for us all to share. I love going out to eat with a group because you can taste pretty much everything on the menu, it’s like you are creating your own tasting menu.

The three large plates were the monkfish, duck and veal. The monkfish was served with spaghetti squash, turnip and a mole sauce. It was a very interesting combination, but worked well. 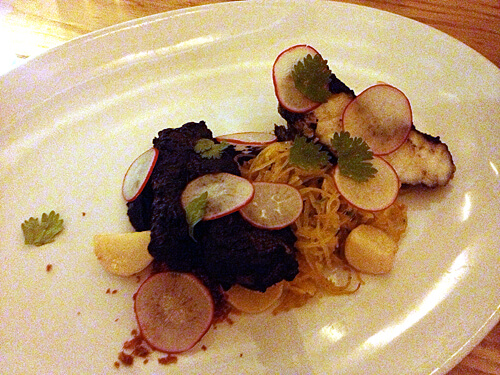 The duck was cooked perfectly and was served with orange, pistachio and rutabaga. I never realized how much I liked rutabaga until that night. 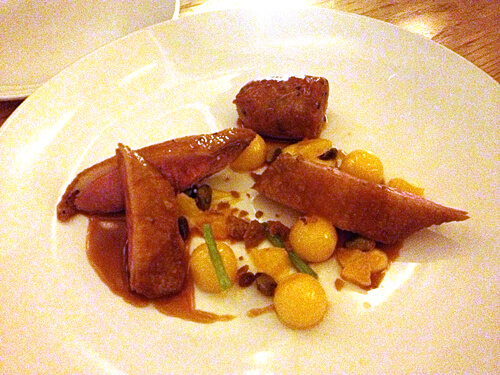 The veal was actually ordered after everything, along with the second serving of sweet breads and a side vegetable, because we realized how hungry we all still were.  I am glad we were, because this was one of the highlights of the meal. The meat was so tender it just melted away in your mouth. It was served with sunchoke, mustard and coffee. 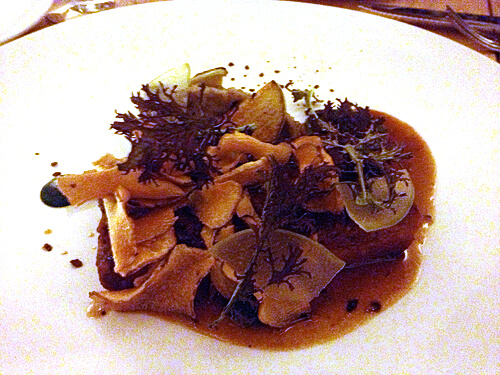 The last thing we ordered with this second round was another vegetable dish- the cavolo nero. This kale was sautéed with chorizo, cranberry bean and beer. My brother’s friend and I pretty much downed the entire thing on our own. Who wouldn’t  like fattening up a healthy green with chorizo?

Finally, we ended dinner with “dessert”. As if I didn’t already love this place enough, they had butter and cheese as an entire after dinner section. If you didn’t know already- I am a serious cheese addict. Unfortunately I was outvoted for cheese in dessert, but we still got some bread and butter. We ordered the Meyenberg goat butter, which was so delicious. It was creamy, but with that hint of tartness that goat’s milk adds. We also had a “real” dessert, which was the white chocolate with popcorn caramel and salt. I am usually not a huge dessert person, but I do love some white chocolate and salted caramel! 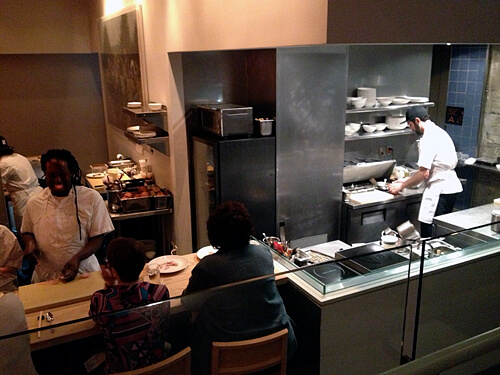 Needless to say, this was the perfect way to kick off my time in the Big Apple. Granted I won’t be able to eat like that the entire time I am here, I am still excited to explore the amazing culinary scene that this city has to offer.

One Year Ago: Pina Colada Cake