Once everybody thought they couldn’t eat any more at my Foodbuzz 24×24, I made dessert. I was really excited about this dessert because I have never lit anything on fire in my kitchen (on purpose). Even though it was hot, and even hotter in the kitchen with the stove on, I sucked it up and got my rum and lighter ready for the bananas foster flambé . 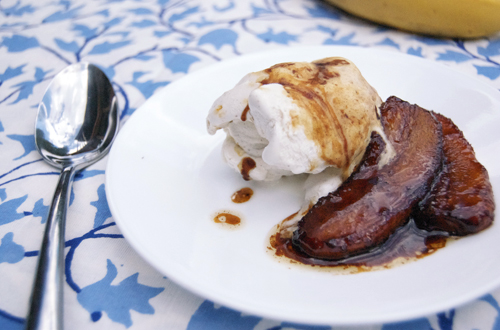 This dessert is actually really simple, even though it may sound intimidating. The sugar is reduced into a dark syrup and coats the bananas. Adding the rum and igniting it gives a bit of a crisp texture to the bananas as well as a hint of rum flavor. I served the bananas flambé with a homemade vanilla black pepper frozen yogurt. Man was that a task in my hot house! I had to put the ice cream maker in the basement because it was too hot in the kitchen for it to freeze, but of course it ended up being too hot down there too! I resorted to just sticking it in the freezer last minute to get it to solidify. 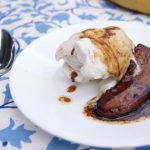