Cooking fancy breakfasts for friends is always a ton of fun for me, but I don’t get to do it often. Usually, when a large group of friends end up spending the night at the same place, breakfast doesn’t get made for everybody for one of three reasons; 1- they wake up with the thought “Man I need to go home”, 2- nobody is in the mood to cook, or 3- you don’t have the ingredients or kitchen to use. If you are not a twenty-something year old you probably hardly ever wake up in a random friend’s house. This means planning a breakfast party if you ever want to have a big breakfast with friends, which for some reason just doesn’t happen as often in our busy lives. I am happy that I was able to cook these delicious crepes for a group, rather than just myself! These are also the perfect idea for a Father’s Day surprise!

This is also my entry for the Highbush Blueberry Council’s recipe contest!

After driving my friends home from the Dispatch concert at Red Rocks, we decided they should just spend the night. Since I was the driver, I woke up the next morning feeling great and ready to cook- lucky for them! There were three huge baskets of blueberries in the freezer that needed to be used, so I was thinking blueberry pancakes. I was feeling a bit more creative that morning so I decided to make crepes with a blueberry compote filling. The addition of cinnamon and vanilla gave the crepes their own flavor and made them delicious even on their own. The blueberry compote added a warm sweet/tart flavor that kicked up the flavor for the crepes and created a delicious sauce. On a side note, I would like throw in that I am very excited about my plating of this dish! I usually struggle with plating, but I think these turned out really pretty! 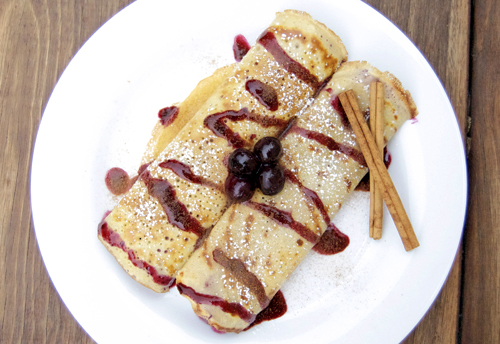 For full-fat: Use 3/4 cup half-and-half and 1/4 cup whole milk instead of 1 cup low-fat milk.
If using Agave nectar: Remember to use 2/3rds of the amount of sugar and reduce the water by a tablespoon or two. 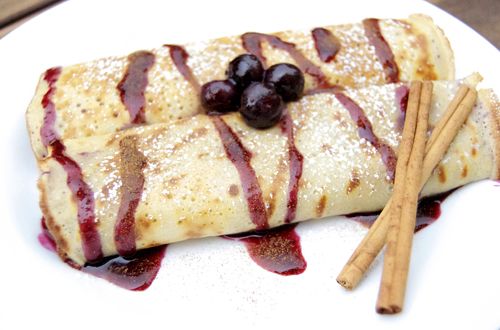