There is something about large cuts of meat that is just amazing. I always feel like a large tenderloin or roast is always much juicier and flavorful than individual pieces of meat. Lucky for me, my mom belongs to a local farm and receives ungodly amounts of meat. I have had a two-pound hunk of beef in my freezer tantalizing me for months. I had not gotten around to cooking it because I did not want to cook the entire thing for only two or so people. This weekend I finally had the chance to have a dinner party, if you want to call it that, and serve this delicious cut of meat to a group of friends. 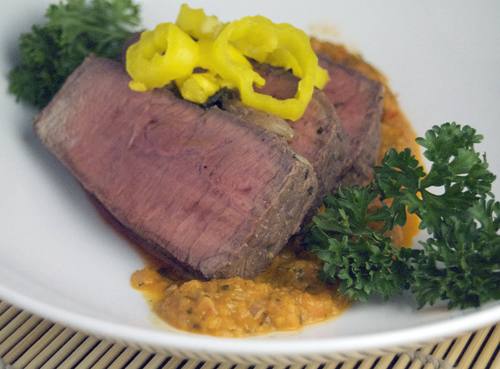 The marinating portion of this recipe gives the meat delicious flavor and makes it extremely juicy when you broil it. Be prepared to start this recipe early in the day because the longer you marinate the meat, the better it will taste. I also really like the sauce that I made for this recipe because it is not your average beef sauce. I thought about doing a Hollandaise, Béchamel or horseradish sauce but they all just seemed too common. Instead, I decided to explore and find my own, lighter, sauce; I ended up choosing this Pizzaiola sauce, which is a tomato and bell pepper sauce. The garnish of pepperoncinis with the meat gives the dish a mild spice, which I thought went perfect with the meat and sauce. 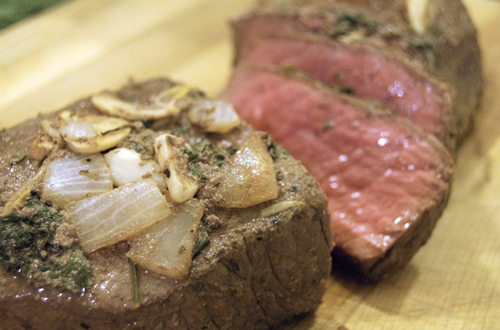 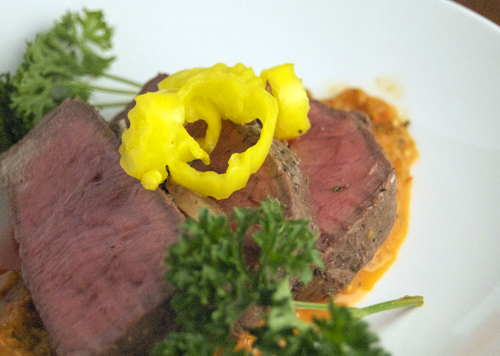