In only a year, my olive oil collection has grown substantially. I seem to accumulate nice olive oils, then never use them. I always just buy the massive bottles from Costco to use instead. The other day my mom mentioned to me that she only had nice olive oils left, so she was only going to use them. I think I have some sort of mental block that I should save them for a “special occasion”. When will there ever be an olive oil special occasion? This has brought me to the decision that I am going to use my nice olive oils as well. I have begun using the oil that my mom got from her adopted olive farm, my chile infused olive oil from New Zealand (summer 2010!), a lemon olive oil, as well as my new DEVO Cilantro and Roasted Onion infused olive oil. When I heard of this DEVO oil, I was instantly intrigued. I had never heard of such an interesting flavor infusion- I had to try it! DEVO also has many other interesting infused oils, check them out! 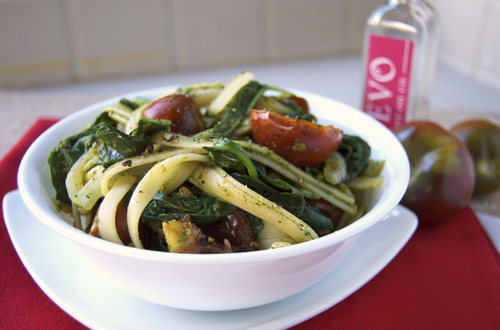 One of my favorite ways to use olive oil, other than everyday sautéing, is making pestos. Many people think of pesto and immediately think of basil pesto, but there are so many other pestos out there! My roommate Kelcey recently made an arugula avocado pesto that was to-die-for! I had a bunch of cilantro that was going to go bad in my fridge, so I thought “What better than cilantro pesto with my infused olive oil?” Looking back I probably could have used it for something else, since now I had two things with cilantro, but it was still a great recipe! Cilantro pesto is much different than basil pesto, I warn you that you need to really like the taste of cilantro to like this one. I add a bit of spinach to tone down the flavor a bit. If you are one of those people who can’t get enough of the big cilantro leaves in Chipotle’s rice, then this is the recipe for you. I served my pesto over pasta, tomatoes and spinach. 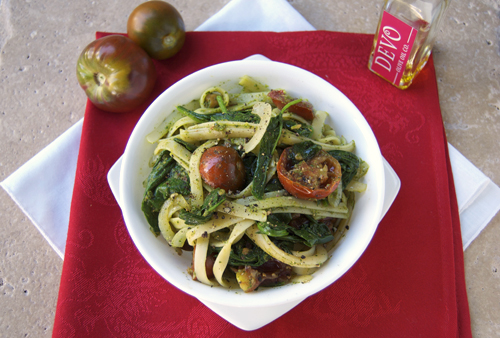 Disclaimer: I received free product from DEVO Olive Oil for this post.